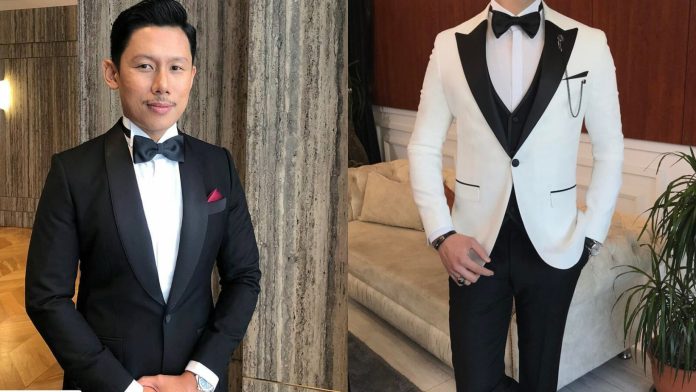 The ladies certainly seem to get the lion’s share in the world of fashion with the sheer amount of choices. For the men, especially when it comes to formal wear, there are typically two options: the tuxedo or the suit. At first glance, they look like they’re the same thing and the terms can be used interchangeably, but they’re not quite the same. The easiest way to tell a tux and a suit apart? Satin.

Tuxedos incorporate satin in their designs, most prominently on the lapels and a stripe down each pant leg.

Suits, on the other hand, are almost always made with a consistent fabric from head to toe. Consider the tuxedo the fancier, more formal older brother of the suit. It’s sleeker in appearance thanks to mindful designs and features such as satin-covered buttons (and a single button closure) and jetted pockets. While this is more a guideline than a rule today, tuxedos are almost never worn before 6p.m. And here’s a simple tip for you: if you see “black tie” as a dress code on your invitation cards, go for the tux.

And if you’re not sure what to get, don’t worry. Consider this your Tuxedo 101 with these 5 different types of tuxedos!

If you’re not quite sure what a lapel is, it’s a fancy term for the “collar” on a suit, coat, or tux. It’s the two flaps on each side of the jacket, and there are a few different types of lapels. The shawl lapel has rounded rather than pointed edges, continuously joined at the back of the neck with a seam and tapering off at the buttonhole. The width of shawl lapels vary, and while a broader lapel is more traditional, a narrower one is more trendy. Shawl lapels are almost exclusive to tuxedos.

The term “dinner jacket” is actually the equivalent of “tuxedo” in the United Kingdom, but when “dinner jacket” is used in a North American context, it refers to the colour of the jacket: white. Most tuxedos are traditionally dark in colour, but one can always experiment with colours, fabrics, and patterns among other things to personalise a tux. Another main difference is that when you wear a dinner jacket, your jacket and your pants colour don’t necessarily have to match i.e. you can wear a white dinner jacket with a pair of black pants.

Getting your tuxedo is just the very first step. To complete your outfit and ensure that you pull off the look seamlessly, there are a few items you need as shared by a local expert tailor Jason:

There’s a very simple rule when it comes to choosing a shirt to wear under your tuxedo: white. Always go for white. As for the collars, there could be a few to choose from, but the wing-tip collar is the most formal, traditional, and safe choice of all. You could also go for a turn-down collar or a smart semi-spread if you know you can get away with it. Besides having a wing-tip collar, your shirt should also have French cuffs, whether square or rounded. French cuffs call for cufflinks, and there’s no better time to bring those babies out than when you’re sporting a tuxedo.

As mentioned right at the beginning of the article, tuxedo trousers feature a strip of satin running down the outseam of the trousers, usually the same material as the lapels. Some trousers may feature a silk waistband, but tuxedo trousers do not have belt loops. After all, tuxedo trousers are supposed to be tailored to each man, but if not, some feature waist adjusters on each side instead. One last option is to use suspenders instead.

Just like how tuxedo dress shirts should always be white, bow ties should always be black. Silk and hand-tied, if possible (experts recommend that you never wear a pre-tied bow tie), or made of the same material as your lapel to ensure that the look is put-together. Bow ties can be tied in different styles, so if you’re new to the bow tie game, it’s time to pull up YouTube for a quick tutorial!

Think of the cummerbund as a broad waist sash, which is usually pleated. Layered on top of your shirt and trousers, the cummerbund basically covers the waist and keeps your shirt looking smooth. Without it, your look may be affected when your shirt untucks or puffs up slightly. Simply put, a cummerbund helps streamline your entire look. Some consider the cummerbund old-fashioned, and alternatives to the cummerbund include vests or waistcoats, but again, you can never go wrong with a cummerbund since it’s most traditional.

Just when you thought you were done, right? Wrong. Last but not least, you need an evening watch. First off, match the face of the watch to the time of day. In other words, since it’ll be dark, the dial of your watch should be dark, or matching with your jacket and the hardware of your cufflinks. Otherwise, you could also match it to the other metallic items you have, such as your rings or glasses. Try to avoid watches with numbers and go for those with Roman numerals or markers instead. The idea is to keep your watch understated, so go for ones that fit well and aren’t oversized with a simple clasp.

Even with the above information, we know that choosing the right tuxedo that’s best for yourself and your event can be pretty daunting, especially if you’re a first-timer. But that’s why there are professionals! Jason’s Men Shop (M) Sdn Bhd has decades worth of experience in customising and tailor-making suits and tuxedos. Priding themselves on their expertise and passion, they provide a meticulous, step-by-step process in guiding you through finding and crafting a suit/tux that’s uniquely yours. Forget James Bond or the Secret Service of Kingsmen. You’re the next star in a tux with Jason’s Men Shop!

All images courtesy of Jason’s Men Shop unless stated otherwise.

6 Shops to Fulfill Your Bagel Craving in KL & Selangor

You Can Now Tint Your Windows As Dark As You Want...

Yuna Is Nominated For An Award From E! People’s Choice So...