This article originally appeared on meimeichu.com

Perhaps the most popular description of Mauritius is this quote from Mark Twain: “You gather the idea that Mauritius was created first, and then heaven, and that heaven was copied after Mauritius”.

Mention the word “Mauritius” and you will hear endless stories of its heavenly beaches, corals, and water sports, yet the little island 1,200km off the coast of Africa is more than just its coastline. Forage beyond the coast into the depths of the island, you will discover that there are so many things to do in Mauritius. Its unique wildlife ecology and cascading mountain ranges bear wonders for the nature junkie. Thank you, Mauritius, for giving me the best Jessica Alba tan a girl can ask for.

To start your Mauritius holiday, you need to first put on your bathing suit. You open your guidebook to pick the best beach in Mauritius only to be overwhelmed by a never-ending list (there are 49 islets!). You can try to ask a local, but each of them will name you a different beach in their handsome Creole accent: “Tamarind has the best surfing!”, “Blue Bay has amazing corals!”, “You want beach shopping? Go to Grand Baie!”. In the end, you pick blindly because from sun tanning to foam parties and water sports, each beach has its own unforgettable charms. Albion beach with a healthy dose of privacy and peace.

You heed the lure of the beaches. The 5-star resort Club Med La Plantation d’Albion on Albion is the first on the itinerary, a calm retreat where it’s so quiet you feel like a castaway. Here in Mauricé, as the locals affectionately call it, there is something magical about the tranquil beaches – the sounds of the crashing waves against your wandering thoughts, the cool of the water, the smell of salty breeze; it is a massage for your soul. Harbouring above palm trees, the sunset is a cheeky mixture of pastel colours. Look up to the sky every day at 5pm and be mesmerised by a different colour play – sometimes it’s a fierce auburn, sometimes it’s liquid gold.

After days of lazing on the private beaches, you leave for a public beach – Flic en Flac. Mauritius’ public beaches receive a new breath of life when the locals come out to play. Stand in the bustle of running children and ringing ice-cream trucks and see pure joy take over serenity. Tarpaulins and stoves set up; grandmothers cooking dhol purri; fathers swimming with their daughters. Behind them, friends gather around chilled bottles of Phoenix beer, playing dominos and music. The smell of mouth-watering curry and the symphony of merry men, Seggae music, and clinking beer bottles – a weekend on any public beach is the greatest Mauritian culture trip. Now it’s time to move those muscles. A long day hiking in Mauritius’ virgin forests is just the remedy. On the scenic drive to Black River Gorges National Park, you’ll realize how small the mountains are. You can’t help but wonder they have to offer. Mauritius’ mountains make up of only 20% of the island, with a surprisingly minuscule height of only 600m to 800m. Do not, however, be fooled by its size. At 829 meters, the highest peak Riviére Noire is enough to take in a panorama of the entire country- the forest, mountains, villages, city, sea, coastline, horizon, all neighbour each other in one captivating view.

Black River Gorges National Park in central Mauritius’ is the island’s sole national park, and home to over 300 species of flowering plants and nine species of endangered birds. A network of fairly easy hiking trails criss cross the wild and empty park, though the sounds of chirping birds and the occasional cameo by fat squirrels will remind you that you are not alone. You stand in the centre of the island after a good sweat, surrounded by the seductive mountain curves. Far away between the crevices of two hills, the sea catches your attention with their dazzles. The horizon between the navy blue of the sea and the light blue sky melt into each other; fresh mountain air soothes your warm sweat.

4) Get Taste of Uninhabited Mauritius at Ile Aux Aigrettes 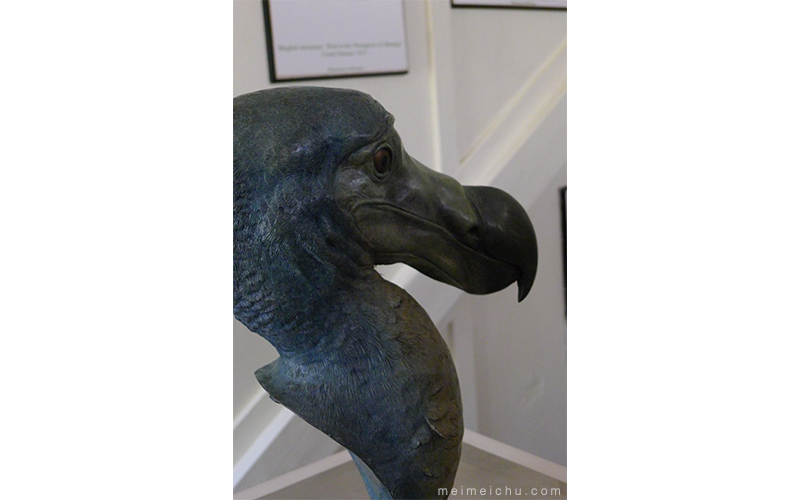 A life-sized replica of the Dodo at Ile Aux Aigrettes

By now you would have noticed the Dodo bird. Dodo on bank notes, Dodo rum, Dodo café, Dodo shirts, Dodo bookmarks, Dodo stamps, Dodo on the coat of arms, Dodo everything. To leave Mauritius without a Dodo memorabilia is ludicrous. It’s only apt to dedicate a paragraph to the Dodo as the Mauritians would. This is a bird that had inhabited Mauritius untouched for so long, it forgot how to fly. When the first Portuguese settlers arrived in the 1500s, the friendly Dodos trustingly greeted them. Little did the birds know that they would fall prey to foreign animals that came along with the men, nor did they expect to be hunted. 100 years later, the last Dodo was killed along with the giant geckos, giant tortoises, and broad-billed parrots. The bird has since become a cautionary tale as more endemic wildlife continue to face extinction.

Intrigued by the Dodo story, you set out to learn more about Mauritius’ unique ecology and you find yourself head to head with a 250kg, 120cm long, Giant Aldabra tortoise. His name, ‘Big Daddy’. You are in Ile aux Aigrettes. Beside you, a park ranger holds a stunning turquoise and red Ornate Day gecko to your face. A couple of pink pigeons fly above you. Established in 1965, Ile aux Aigrettes was gazetted as a Nature Reserve to save the last remnants of not only the Mauritian but also the Mascarene coastal forest. This is the closest you will get to pre-inhabited Mauritius. With its dense ebony trees, olive-white eyed birds (38 left),  and Echo parakeets (500 left), this natural museum is a treasure trove of wonders.

Your Mauritian nature adventure is now coming to a close, and you are in the mood for an adrenaline rush. You hop on the rickety bus and return once more to the beaches. This time, to where serenity meets action. Mauritius is synonymous with snorkelling and diving, but what about water sports? One of Mauritius’ best-kept secrets is Le Morne. Located in the south, Le Morne is not only a UNESCO World Heritage Site but also a popular kite-surfing spot. This is definitely one of Mauritius’  top must see places. It is where professional kite surfers come to hone their skills, budding kite surfers train to become professionals, and non-kite surfers watch with their jaws dropped. If you’re not keen on kite-surfing, there’s also regular surfing, wake-boarding, water-skiing and other water sports for a dose of adrenaline rush.

It‘s hard not to take a beautiful picture in Mauritius. You look above to see sunsets you’ve only seen in paintings, you’ll be left speechless at how beautiful nature is; you see the playful sun piercing her rays through thick clouds and you can’t help but to smile. This is not a country where you get overwhelmed by its architecture, food, or lifestyle, it is an alternate reality where you get lost in the horizon. The sunset in Mauritius took my breath away

Many come to Mauritius just for the sun, sea, and sand, but take a walk on the wild side and you will discover that Mauritius is not just another beach destination.

8 Benefits You Can Get From Drinking Soup

Prince Harry And Meghan Markle Stepping Down; Did We Expect This?

Review: 6 Reasons You Should Watch The Much Anticipated K-Drama Our...