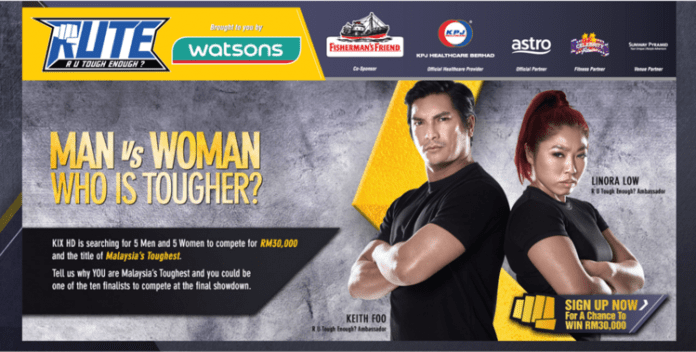 Men and women have different views when it comes to defining toughness. For men, it has always been about physical strength, while women tend to focus more on endurance and perseverance. But when they are put up against one another, we have to ask, who is tougher?

KIX HD (Astro Channel 729), the ultimate destination for action entertainment in Asia, and Astro are looking for the answer to this question through the return of R U Tough Enough? The competition aims to go beyond the stereotypes by recruiting five male and five female contestants to face off a “Man versus Woman” edition. The ten contestants will go through a series of physically demanding and emotionally enduring challenges, to determine who is the tougher gender. Only one winner can be crowned “Malaysia’s Toughest” and walk away with the grand prize of RM30,000.

The radio talent and fitness enthusiast Linora Low from MIX fm and Malaysia’s number one hero, Keith Foo were chosen as the ambassadors to emphasise this year’s theme of “Man versus Woman”. The ambassadors will lead #TeamLinora and #TeamKeith respectively in the challenge to determine which gender is the toughest.

Fitness enthusiast Linora Low has silenced doubters by successfully training in physically enduring challenges alongside her male counterparts. “Toughness for me is more than the appearance of being physically muscular and strong. It is about challenging the norms and benchmarks set by society and myself to redefine toughness for a woman,” said Low.

Keith Foo is also a true example of toughness, having persevered through humble beginnings on the path to becoming the most sought after film actor in Malaysia. “Being tough is about setting my mind towards overcoming the challenges life throws at us on a daily basis. It is about keeping that positivity and optimism even when the going gets really tough,” said Foo.

R U Tough Enough? is open to all Malaysian residents aged 18 and above. To enter the contest, participants must first apply online at tough.kix-tv.com. Ten tough individuals will be selected to compete in the final showdown for the title of “Malaysia’s Toughest” and a grand prize of RM30,000.

As part of the recruitment process for R U Tough Enough?, KIX HD will send their Tough Troopers to several hotspots in Klang Valley to challenge individuals to demonstrate their toughness on the spot through a series of tests.

R U Tough Enough? is brought to you by Watsons, co-sponsored by Fisherman’s Friend and the official healthcare provider KPJ Healthcare Berhad, with the official partner Astro, the venue partner Sunway Pyramid, and the fitness partner Celebrity Fitness.

Tiger Brings You Extraordinary Street Food Collabs in a Box

Does The Brand Of COVID-19 Vaccines Matter?

8 Things To Know About Army of the Dead, Zack Snyder’s Latest Zombie Movie

8 Health Benefits You Can Get From Almond Butter

5 Reasons Why Your Dog Has No Appetite