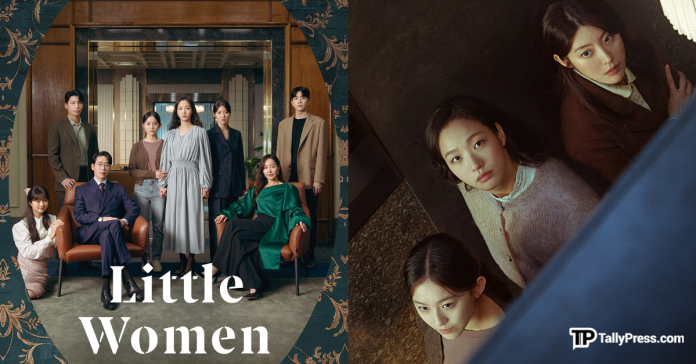 Having premiered its first episode on 3rd September to excellent ratings and the second episode doing even better, Little Women is the latest Korean drama that everyone is raving about. From the outside, it may look like a warm and sweet tale of three sisters who grew up in poverty but there is more than meets the eye. The story takes a sudden and alarming turn when 70 billion Korean won worth of money gets involved and the sisters find themselves facing off against the wealthiest family in the nation.

Check out the trailer for Little Women below:

What is Little Women about?

Little Women tells the story of three sisters who grew up in poverty and how they rely on one another to fight the richest and most powerful family in South Korea. It focuses on the journey of the three sisters as they learn just how money would affect their lives.

The teamwork of the production teams, whose talents are unmatched, is something that viewers can anticipate. Director Kim Hee Won has received recognition for her meticulous directing in Vincenzo and The Crowned Clown, while writer Chung Seo Kyung has previously established herself with films like The Handmaiden and Decision to Leave, as well as the drama Mother. Their combined skill sets are sure to wow viewers with amazing results. The buzz is heightened with the brilliant cast of seasoned performers like Kim Go Eun, Nam Ji-hyun, Park Ji Hu, Ji Hu, Wi Hajun, Um Kijoon, Kim Mi Sook, and Kang Hoon.

We are also excited to see the sisterhood of Kim Go Eun, Nam Ji-hyun, and Park Ji Hu in Little Women. Viewers are excited to see what they have to give next because all of them have made names for themselves and captured fans with their previous work. Not only that, the many hidden stories between the other characters in the drama is another point to watch out for.

Who are the cast?

Kim Go Eun stars as the eldest sister Oh In Joo, an ordinary accountant who suddenly finds herself involved in the disappearance of a 70 billion won slush fund. As someone who was raised in poverty, she was very young when she realised the power of money and how it might protect her family. Her one and only desire was to live like everyone else. But when unanticipated events take place in front of her, her entire world is turned upside down.

During the press conference, Kim Go Eun explains about her character Oh Injoo, “She lives her life trying to love others and express her feelings in her own way, and does her best in everything she does. I think that’s what drives her to live and exist.”

The middle sister Oh Inkyung is played by Nam Ji Hyun, a dedicated news reporter who enters a perilous situation in order to unravel a mystery from the past. Although she has been poor her whole life, she doesn’t believe that money rules her life. As a journalist, she is driven by the need to “do the right thing” with a sense of mission and empathy.

“Persistent, passionate, calm, driving force” are the words that Nam Ji-hyun uses to describe Oh Inkyung. She said her character “is the most persistent, rational, passionate and unrelenting in getting what she wants” out of all of the characters she’s portrayed.

Actress Park Ji Hu plays Oh Inhye, the youngest sister who is overcome by her sisters’ devotion. Oh Inhye is a brilliant artist who, despite being impoverished, enrols in a famous arts school using just her abilities. As she gets a taste of a whole other world from the cruel one she has always experienced, she tries to escape the safety of her sisters.

Park Ji Hu even attended painting lessons to perfect her character Oh Inhye, a creative genius who uses art to convey her inner self. When she was asked about her character during the press conference, she said, “Oh Inhye is the youngest, but she is mature and realistic since she had to grow up young. This side of her sometimes hurts her sisters.” At the same time, she said that, “Oh Inhye is thankful for her sisters’ sacrifice for her and feels sorry. That’s why she tries to stand on her own feet. I tried to make this come to life more persuasively.”

Choi Do-il, who is portrayed by Wi Hajun, is a guy who regards money as the most sacred thing on earth. He unintentionally collaborates with poor administrative assistant Oh Injoo to look for the 70 billion Korean won.

Choi Do-il is the vice president of the foreign operations for Wonryeong Group and a Wharton alumnus with considerable potential. Rumor has it that he serves Park Jaesang’s family more as a financial counsellor. He portrays himself as a simple man who would do anything—even offer his life—for money. He can come off as kind sometimes and at other times as cold and untrustworthy.

You might recognise Wi Hajun from drama The Bad and Crazy and Squid Game. During the press conference, he explained about his character, “I tried my best to portray all such sides of him, which may lead the audience to be perplexed, wondering whether he is good or bad. All I did was to faithfully portray the character.”

1. Director of Vincenzo back at it again with a solid storyline

Director Kim Hee-won, best known for directing Vincenzo, has returned with a new mystery story. This time, she teams up with writer Chung Seo Kyung, renowned for her work on the masterpiece The Handmaiden and the recently popular movie Decision to Leave. Chung Seo Kyung penned the captivating tale of three courageous but impoverished sisters who are about to rebel against the richest family in Korea. Her stories usually have clear-cut, sympathetic motivations: the three sisters are very close, yet the subject of money (or the lack of it) permeates their lives.

Describing her instant chemistry with her two co-stars, Kim Go Eun recalled, “When we all got together for the first time at the script reading, it really felt like we were sisters, so much so that I even wondered, have we met somewhere else before?”

The three actors “have such a warm chemistry with their kind personalities and professional attitudes,” according to director Kim Hee-won. They work well together because they are supportive of one another. The cast also included seasoned performers like Um Kijoon and Uhm Ji-won as well as Wi Hajun, whose performance in Squid Game made a lasting impression on audiences.

Spoiler alert: there is also a cameo by Vincenzo star Song Joong Ki to look out for!

The attention to detail that director Kim Hee-won puts into her work is renowned, and this draws viewers in and piques their interest in the following episode. She claims in Little Women that she wanted to “overturn people’s expectation that Little Women is just a cosy and warm story” and by concentrating on the specific problems of each sibling, she hoped to expose the hidden, sinister truth that lies at the heart of their culture. She also stated her respect for Chung Seo Kyung (writer), Ryu Seong-hee (production designer), and Park Se-joon (music composer) who came together to create a work of art that is Little Women.

Little Women broadcasts every Saturday and Sunday on Netflix!

If you liked this, you might enjoy this too:

8 Local Foods To Try For Your Next Trip to Kuantan