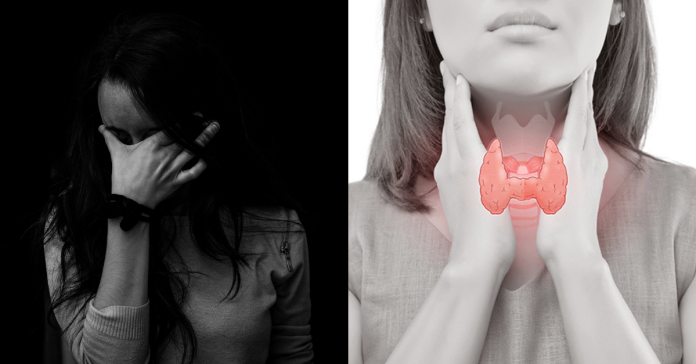 In fact, my mental health issues were mostly caused by a small butterfly-shaped gland located in the neck, just in front of the windpipe. It’s called the thyroid gland and what I had was hyperthyroidism. This term or even the word thyroid gland may not be familiar to a lot of people but if you’ve heard of goiter, then you’re halfway there.

Before I continue further, please know that this article is written from my personal experience. While I am passionate in increasing the awareness on this disorder, this article is in no way intended to diagnose or treat any medical condition. It is also not intended to substitute for professional medical advice. Please consult a doctor or a healthcare professional if you have any concerns with your physical and mental health.

The thyroid gland plays a very important role in our body by releasing two types of hormones – triiodothyronine (T3) and thyroxine (T4) which helps to control our body’s metabolism and regulate vital functions such as body temperature, heart rate, muscle and digestive function, brain development and bone maintenance.

In Malaysia, the latest study published in 2019 found that 3.4% of the population has hyperthyroidism and 2.1% has hypothyroidism. What stood out for me from the data of the study was how 68% of the participants didn’t even know they had a thyroid dysfunction.

Females were found to have 5 to 8 times greater prevalence of thyroid disorders than males. About 1 in 8 women would be affected by thyroid problems at some point in their lives, typically between 20 to 40 years of age.

A quick Google search would show you what kind of symptoms you might have. The thing about the symptoms is that they are similar to many other health problems which can make it difficult to diagnose.

If left untreated, hyperthyroidism can have severe results that may even be fatal.

Heart: Some of the more serious complications involve the heart. These include rapid heart rate, increased risk of stroke and congestive heart failure.

Bones: Because too much of thyroid hormones can affect the intake of calcium into the bones, it can lead to osteoporosis.

Eyes: One of the causes of hyperthyroidism is Graves’ disease. People with Graves’ ophthalmopathy can develop eye problems, including bulging, red or swollen eyes, sensitivity to light, and blurring or double vision.

Fertility: Menstrual cycle is disrupted causing difficulty in getting pregnant. It can also increase the risk of early-term miscarriage or premature birth. In men, it can cause a reduction in sperm count.

As you can see from the image of symptoms above, there was only one that was related to mental health which was feeling nervous and anxious. However, from personal experience, it was much worse than that.

The connection between thyroid dysfunction and mental health is strong – it is known that T3 controls the level of serotonin (helps to regulate mood) and noradrenalin (plays a role in mood and ability to concentrate). As such, T3 has been linked closely to depression and anxiety.

However, symptoms often overlap and instead of being treated for a thyroid problem, people can be misdiagnosed as having mental illnesses. On the other hand, people who are being treated with thyroid dysfunction may have their mental health overlooked.

My Journey with Hyperthyroidism

I was first diagnosed with hyperthyroidism in 2012 when I was 21 years old. The doctor noticed that my heart rate was very fast, it was about 120 per minute. FYI, an average person’s heart rate is between 80 to 100 per minute. I was referred to a government hospital where I was diagnosed and given the medication (carbimazole) that would help control my hormone levels. I stopped the medication after a year when my hormone levels stabilised.

In 2017, a family member mentioned that I was losing weight the same way I used to before I was diagnosed with hyperthyroidism. That rang a bell in my mind, and I went to get my blood tested. Lo and behold, my thyroid was acting up again. Just like before, I took the medication for about a year.

I guess third time’s the charm – my thyroid hormone levels were high again in late 2019 and I went to a government hospital to see a specialist. In September 2020, I underwent the radioactive iodine therapy (RAI) which obliterated my thyroid cells so that I no longer have a functioning thyroid. Now I take another type of medication (levothyroxine) which is a synthetic thyroid hormone to replace the hormones that my thyroid gland can no longer produce.

As you may notice, it’s been a very long journey and it is a lifelong disorder because I have to take the medication for the rest of my life. But I would say that I am lucky because this is a disorder that can be managed and contained. If treated well, it is neither fatal nor debilitating. In terms of the symptoms, once your hormone levels are within normal range, a lot of them would disappear or at least be tolerable.

However, I want to point out the effects thyroid dysfunction can have your mental health as per what I experienced. I never connected my mental health issues with my thyroid problem until the third time that it happened. It was then that I realised all the depressive and suicidal episodes that I had were a symptom of my high levels of thyroid hormones.

I recall the time before I found out I had hyperthyroidism. The first time, I even failed two of my subjects in my course because the depression and anxiety I was feeling were too overwhelming. During the second and third time, things got really dark, and I had suicidal thoughts to the point where I was forced to see a doctor. That was also my first time in an ambulance because the doctor was afraid that I coudn’t keep myself safe and he wanted a psychiatrist to see me.

During this third time was when I saw the difference in my mental health between the ‘before’ and ‘after’ of taking medication that helped to stabilise my hormones. Even when I was going through a tough or stressful time, I felt that I could manage it compared to before where I would have spiralled into negative thoughts immediately.

Nowadays with mental health awareness on the rise, there are many resources for us to refer to when we need help. Which is great but I would also like to remind everyone especially women between 20 to 40 years old to include thyroid screening when you go for your medical check-up. It is much more prevalent than you think.

If you have questions, I am more than happy to answer in the comments. On a lighter note, if you are looking for Christmas presents – check this article out!

Anyone Can Be Their Own Masterchef At This Cooking School, Palate...