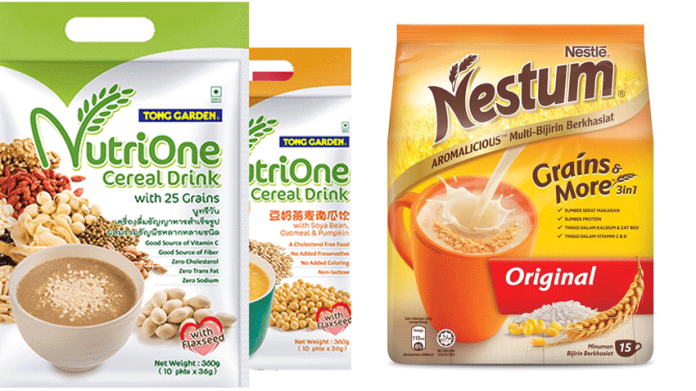 Not everyone has the luxury of spending time making breakfast from scratch, particularly during workdays. And yes, that also applies to some of those who work from home. So, if you happen to be one of them, here are the 6 Delicious Cereal Drinks For Busy Professionals, so that you can still fill your tummy even if you’re short on time!

Mention the word “Tong Garden”, the first thing that immediately comes to mind is their range of ready-to-eat assorted nuts. But the brand has also expanded its existing range with more choices such as dried fruits, popcorn and even cereal drinks.

Let’s talk about the latter, where Tong Garden released its NutriOne Cereal Drink range that comes with five flavours. Originally priced around RM 22 for 9 sachets, I have to admit it wasn’t exactly an economical all-in-one cereal drink compared to most other brands.

But I did try two of its available flavours (Soybean, Oatmeal & Pumpkin and Red Bean & Black Rice) after managing to purchase them slightly cheaper from Tong Garden’s Lazada official store during its online sale. Both flavours taste mild, yet appetising. And best of all, they are not overly sweet while I love the texture of the mixed grains incorporated into the cereal drink.

I’ve always loved the latter after I first tasted them around one or two years ago. It comes in a box of 14 sachets and their ingredients consist of whole-grain brown rice powder packed with vitamin B3 and B9. The good thing about this brown rice cereal drink? It contains no preservatives whatsoever and while it can be a little too sweet, I did enjoy the overall taste of its smooth brown rice flavour. You can get them online via Nature’s Own official store (here, here and here) as well as selected supermarkets.

If you are a fan of black sesame cereal, you might want to try this brand from Gold Choice Nutra 8 series. The Nutra 8 series itself has a few choices available, namely Apple Cereal and Spirulina Cereal. But so far, I only tried their Black Sesame Cereal. It has a distinctly toasty flavour while the thickness of the black sesame cereal makes it a fairly filling one for a quick breakfast beverage. And here’s the good thing about this cereal drink if you suffer from constipation since the black sesame itself contains omega 3 fatty acids. Not to mention the added fibre means drinking this every day helps to regulate bowel movements (well, it worked for me). You can purchase them right here or here or at selected supermarkets.

The name Quaker needs no introduction, given its longstanding history for more than a century (140 years, to be exact). They are, of course, known for their range of oatmeal available in Instant, Quick Cook and Rolled Oats varieties. Quaker has its own convenient 3-in-1 Oat Cereal Drink series, where you can enjoy it easily by just adding hot water to each sachet on a cup and stir until they mix all together. I have tried three of its six available flavours so far (Original, Chocolate and Berry Burst) and some of them taste good. The Berry Burst flavour, however, tastes kind of too sweet to my liking. You can get them in most supermarkets or Quaker’s official store online.

One of the things I love about Super NutreMill is its affordable price range, particularly if you purchase them online. For example, I often buy some of Super NutreMill cereal drinks from LazMall Grocery Store, where I can get them cheaper around RM 9-11, depending on the flavours. Speaking of the latter, I have tried two of them (Original, Brown Rice and Chocolate). They taste good and comforting (I usually have them for breakfast and sometimes during supper if I work late at night).

Here’s one of the all-time favourites that I’m sure many people regardless of older and younger generations know about it. I’m talking about Nestum from the Nestle brand. They have released several 3-in-1 cereal beverages, offering familiar and unique flavours like Chocolate, Dates & Prunes and even Sweet Potato & Taro. I have tried the latter before since I thought the flavour combo sounds interesting. Well, at least in a theoretical manner. I’m not sure about the others but it tastes weird. The Chocolate and Honey varieties taste decent but I still prefer the Original the most.

Ever heard of NutriRite? I first came across this brand when I shopped at NSK Trade City a few years ago. The brand has three flavours available, which include Original, Oats & Honey and Low Fat. I have tasted the first two flavours but Oats & Honey is too sweet. The Original flavour is what I like about NutriRite the most. Not only it tastes comforting but the added corn flavour makes the cereal beverage more, well, drinkable. You can get them right here or at selected supermarkets.

Should You Get A Part-Time Or Full-Time Helper?

Unwrap The Asian In You With The New Wall’s Asian Delight...

9 Gift Sets Perfect for Someone in Need of Self-Care