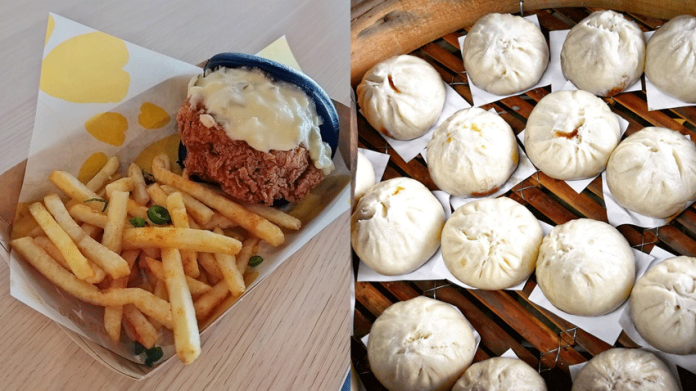 Baos or Chinese steamed buns are one of the Asian food staples that are typically enjoyed as a breakfast or a snack. Traditionally, they either come with savoury or sweet fillings such as char siew (BBQ pork) and tau sar (red bean paste). But these days, you can also find modern-day baos with unlikely fillings, namely fried chicken and lamb. So, no matter you prefer contemporary or old-school types, we got them all covered here with our pick of 6 Places To Try Modern & Traditional Baos in Klang Valley.

The Bao Guys have come a long way since its humble beginnings as a home-based business. They have since opened their own shop in the bustling neighbourhood of SS2. Or more specifically, on the first floor of the shop lot. I went there a few weekends ago and noticed their menu is rather limited. Of course, what matters the most is the taste of their baos. I ended up ordering one of their signature baos called Cluck Norris (a playful homage to the legendary martial arts star, Chuck Norris). It consists of a medium-sized charcoal bao sandwiched with a piece of thick and crispy boneless fried chicken, gherkins and some Japanese egg mayo. It’s a simple but satisfying combo and I love the pillowy texture of the charcoal bao.

Other than Cluck Norris, some of The Bao Guys’ popular choices include Beef Be With You and the braised lamb-based Pho-king Good. You can opt for a la carte or combo set, where the latter comes with a drink and fries.

The name of the place, which literally means “large steamed bun” in Mandarin, serves contemporary-style bao varieties. They have a few choices here, with recommended ones like the crowd-pleasing Pork Bao — sake-braised pork belly with crispy pork lard, preserved mustard greens, roasted peanuts and coriander sandwiched between the fluffy white bao. Those who prefer chicken can go for Chicken or Spicy Chicken Bao or the non-meat variety (Vegetarian Bao), which is packed with delicious goodies like Shimeji tempura, sauteed shiitake and mapo tofu emulsion. Love seafood instead? They got that covered too including Fish Bao and Soft Shell Crab Bao.

Based in Kuala Ampang, Sek Bao covers both local and Asian flavours in soft and fluffy white bao. Choices are aplenty here, covering from Teochew Braised Pork to Bak Kwa Egg, Pork Satay and Kampung Rempah Chicken. They also have Nasi Lemak Pork and others like Korean Fried Chicken and Thailand Moo Ping. You can choose a la carte or go for the mix & match variety of either 2 or 4 baos of your choice.

Restoran Wai Kwan may look like an ordinary Chinese coffee shop that houses several stalls. Here, you can find them selling familiar foods like chee cheong fun, pan mee and chicken rice. But what makes Restoran Wai Kwan particularly a standout has to be the famous stall selling traditional bao. Not just your average bao but the kind that is made fresh on site. In other words, they do everything here from rolling the dough to adding the fillings and steaming them in bamboo steamers. And they do not use preservatives either. When it comes to fillings, they have classic options like Char Siew, Mui Choy (preserved mustard greens) and Nam Yu Pork.

This decades-long Chinese restaurant specialises in dim sum varieties and of course, their signature traditional bao. Expect generous fillings as well as soft and fluffy bao all steamed to perfection. Speaking of fillings, they offer familiar favourites like Char Siew (apparently, their most popular choice here) and Tau Sar (red bean paste), just to name a few.

Believe it or not, Seng Kee Pao has been around for nearly 50 years since its establishment back in 1975. They are renowned for their traditional handmade bao using tried-and-tested Fuzhou recipes. Among their available flavours including char siew, tau sar (red bean paste) and their top-selling dai bao — a large Chinese steamed bun consisting of various fillings including pork, chicken and egg.

Have You Heard Of Oubao? Here’s Where You Can Get Some To Try

10 Startup Companies That Were Founded In Penang

10 Monster Movies You Shouldn’t Miss Out On